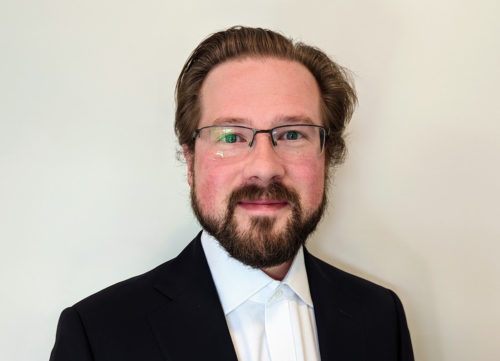 My name is Neil Lassen and I have been making a living through the internet since before I graduated from college.

I grew up in the Midwest (Wisconsin) outside of a small town. Ever since I was little I have been fascinated by technology and can still remember the Windows 95 loading screen from the family computer. At that point, I knew I wanted a computer of my own.

After several years, I managed to make a deal with my parents and got my fathers work laptop handed down to me (Thanks dad!), a decision I assume they probably regretted heavily at the time. I was hooked!

Anything I wanted to learn, I could find on the internet. I could find any number of forums (remember when those were a big thing?) for everything I was interested in. I also quickly learned that you could play games… with people all over the world.

When I turned 18, I got my first job as a cashier at Sam’s Club (This is basically wholesaler of Walmart). Before that, I was never able to find a job and had done volunteer work.

I worked at Sam’s club for under a year, because after the summer was over, it was time to attend college. After my first year of university, I transferred to the University of Wisconsin Madison and at the time, I initially thought I wanted to be an investment banker, which very quickly changed to wanting to become an attorney.

After my first year of college, I needed to find another summer job, and landed a position as a salesman selling tools at Sears. While I look back and this was by far the worst position I have ever had (mismanaged, boring, very few customers), it forced me to step out of my comfort zone in 2 particular areas.

With online marketing and ecommerce, these are two crucial skills. You are constantly learning new things and interacting with people you have never met before. While these were important skills to learn, $6 an hour plus 1% commission didn’t really feel worth it.

After the summer was over, I quit that job and went back to school. However, this was a more expensive place to live, and I needed to find another job quickly.

I applied to 87 places (I actually counted), and received a single call back from Target. I now had a brand new job pushing shopping carts for $8 an hour and this was the “best” job that I ever had.

It was at Target that I met a lot of great people, but they all shared one thing in common: They did not like what they did.

During one night at Target, I was scheduled to close the store on July 4th. Since I lived a few miles away, I closed up, went down to the bus station and waited.

I waited for that bus for over an hour before I realized that the bus did not run on the 4th of July because it was a holiday and decided to walk the few miles home in the middle of the night (I think I must have forgotten about Uber at the time).

When I arrived back at my apartment, I was completely fed up. I sat down on the computer, and started googling “how to make money online”, like many of you have probably done in the past. What I found was staggering. There were people all over the globe creating websites, and earning more in a month than I was earning pushing these shopping carts. If they could do it, I thought I certainly could!

…except I had no skills to do any of this. I had no idea how to create a website, how to get a website in front of customers, or even how to register a domain name. I had a LOT of learning to do, and this became my obsession every single day. Learn as much as possible and put it into practice. I did not want to remain at my Target job any longer.

Within 6 months, I had learned how to create a website, get the content promoted to thousands of people, gain search visibility, and land larger affiliate commissions through brand deals.

Once I had 3 months of consistent earnings from my website, I walked into Target, gave my 2 weeks notice and quit!

Fast forward a few years of doing this, with lots of ups and downs in the business I was attempting to run, I decided not to go to law school and take a chance on myself. While at times it would be nice to have a law degree, I am incredibly glad I did, because it has led to a lot of very fun projects, and meeting a ton of great people.

It wasn’t until later on that I truly saw success and pivoted into what I would eventually end up doing.

You see, after that first initial website success, I bounced around doing a LOT of different things. I made websites, I created twitter profiles, I tested out Youtube, paid ads, Facebook… anything you can think of, I gave it a shot to try and create a more “stable” income.

Eventually, I discovered Amazon FBA (Fulfillment by Amazon). This allows 3rd party sellers to send in their products to an Amazon warehouse, and then when a customer purchases them, they ship it directly from the warehouse, not from your door.

The only issue? I was buying products from China, and they kept getting stuck in customs! I once again, was not sure what I was doing, but was trying it out anyway.

At this point, someone I had met on an internet forum ended up sending me a link to a TechCrunch article about Amazon launching a brand new service for app developers. This allows app developers to have product pages on Amazon for clothing (t-shirts), and was all done via the print on demand model. Once a product sold, Amazon printed, shipped, and dealt with the customer service, and simply paid you a royalty for uploading a PNG file.

That sounded like the solution to all of my problems, so I jumped in!

Merch by Amazon became my main focus because the sales were flowing in faster than every other avenue I had attempted to do in the past. Amazon is the world’s largest marketplace, and has millions of customers, so there was no need to figure out how to drive traffic from external sources, or convince people to buy. They had all of this taken care of, all I had to do was created optimized products that people wanted!

I started spending a good 10-15 hours a day searching Amazon, making thousand line spreadsheets, and really digging into what the market was missing, so that I could create those products and fill the demand. Every other project fell the wayside and I was obsessed.

There had to be a better way though, it did not make much sense to be doing the same repetitive task over and over again.

…and there was, through the creation of Merch Informer with my business partner that had originally sent me the TechCrunch article. 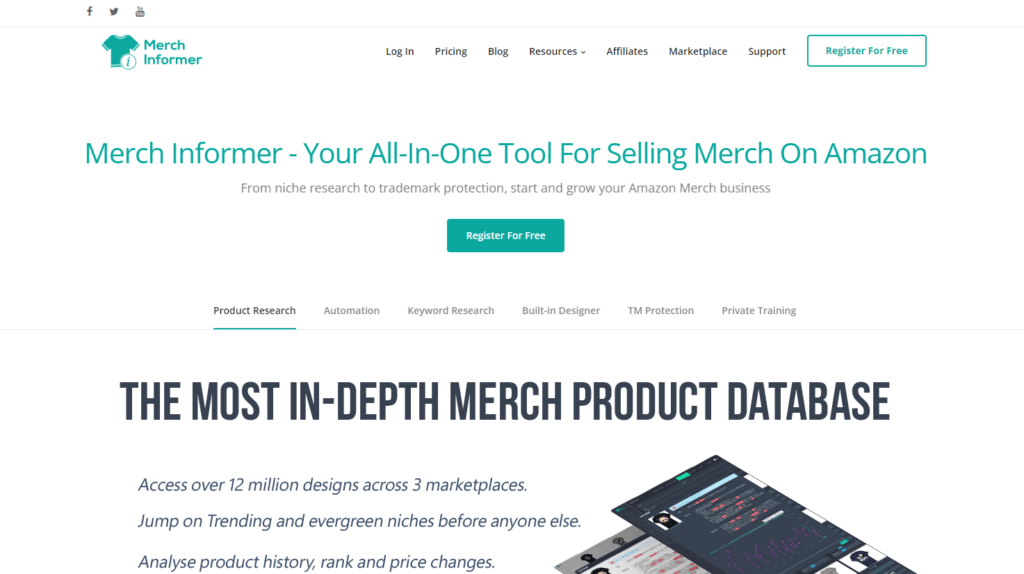 We launched Merch Informer in the later months of 2016 to a very small audience who was having the same growing pains that we were in our Merch by Amazon business. These initial users were the foundation of what Merch Informer has grown into today. They provided feedback, shared their pains in the business, and we set out to fix them (or ease them) all via our software.

Today, Merch Informer has helped hundreds of thousands of businesses grow and gain more exposure and sales on the Merch by Amazon platform, as well as has provided crucial design applications and trademark protection in a world of creativity. 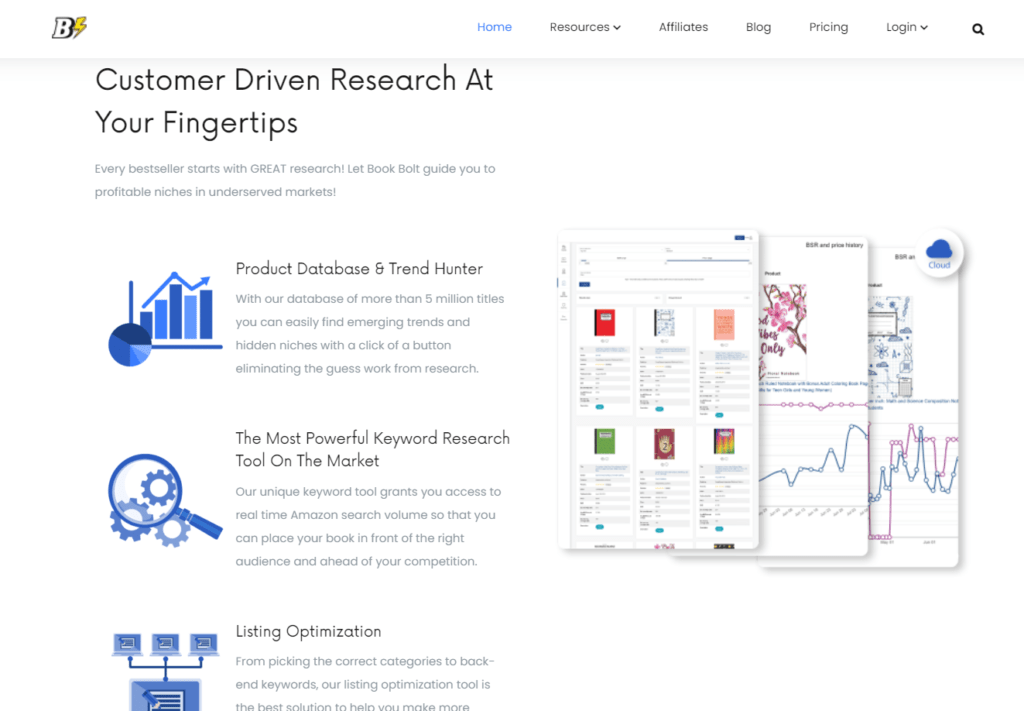 After a few years of building, growing, and scaling Merch Informer, many of our customers started talking about a way they were expanding their business: Through Amazon KDP.

Our customers are artists, creatives, and business people, so what they were doing is repurposing their clothing designs, and turning these into coloring books, journals, notepads, and more.

This method became known as “low” or “no” content book publishing.

There was a problem though, everyone selling on KDP had the exact same issue we had when we started selling ecommerce goods on Merch by Amazon. The process was slow, agonizing, and painful. Creating products is hard, but finding out what customers actually want to buy that are not long form novels, is even harder.

Book Bolt was born at the beginning of 2019 and we set out to build an all in one software that would assist sellers at every step in their journey.

Today, Book Bolt has gained hundreds of thousands of users globally, and continues to be a 1-stop-shop for Kindle Direct Publishing book sellers from coloring book authors, to activity book creators, we have built tools for everyone.

In July of 2020, we launched a brand new software to again assist Ecommerce sellers build and scale a new type of business – this time on Etsy.

This software is called Sale Samurai and was built to assist sellers take their creative work, and use data and analytics to get these products in front of a hungry audience.

We had noticed that a lot of our customers of Merch Informer and Book Bolt were loving selling on Amazon, but they (just like me), were always looking for a way to grow and scale their business by looking for new opportunities.

They found this opportunity in the form of a new marketplace, Etsy. This platform had millions of shoppers as well, and provided access to a whole new target demographic.

In this space though, there were already other softwares available to the market.

So why did we start Sale Samurai?

Those other softwares are complicated, full of “bloat”, and never really nailed down exactly what Ecommerce sellers actually wanted – a way to get seen on the platforms they were selling on.

Today, Sale Samurai is continually growing month over month, with thousands of users either starting their business, or optimizing and growing an already successful Etsy store.

All of this was achievable because of the internet and you can do it too! My website shares tips, tricks, case studies, and all around information on how you can get started creating value for other people on the internet and using that value to get paid. I want to share insights that I have gained over the years to help you learn and grow in your own business. You can also follow my work from the websites above.